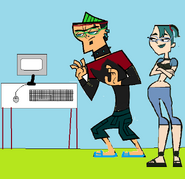 Alt!Candace from Across the 2nd Dimension. Not that anyone would complain... Regular Candace has several outfits like this as well. Stacy has several outfits like this during the "Disco Miniature Golfing Queen" number from "Put that Putter Away". Isabella, too, has an outfit that shows off her tummy during the same number from "Put that Putter Away", as well as a Hawaiian Hula outfit, mistaken for a "belly dancer" outfit, in "What Do it Do?". So did Fireside Girl Adyson in "Put That Putter Away".