To a lesser extent, Crane and Mei Ling in Secrets of the Furious Five, where the feline Action Girl is so nice and loyal to the bird in the All of the Other Reindeer situation that many fans like to imagine them having a romantic relationship while they are at it.

Lots of this in Teenage Mutant Ninja Turtles (2012). The writers use Donnie's crush on April as comic relief, but some fans are taking it seriously. Despite this, the writers do include some ship tease for Casey and April. On top of that, Leonardo has a variance of Dating Catwoman with Karai. They seek each other out for fun, they both care about the other's well being despite technically being enemies, and their battles absolutely reek of sexual tension. And the third season give us mikey finding love at first sihgt with renet an asssistant time master in trainig, trying to impress her and flirting with her endend with having a first Kiss from her. season 4 we see raph falling in love with an alien that he names mona lisa when she sees how noble he is she flirts and Kiss him, season 4 also introducs a second love for mikey "shinigami" he always tries to gether ateention 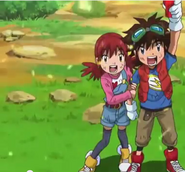